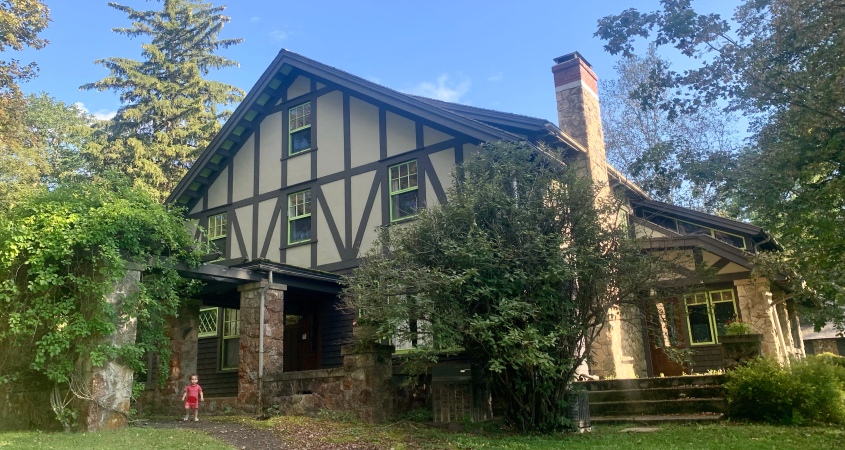 Yesterday I finally managed to locate and read the book that recounts the history of this great home. Built in 1914, the Ben Tousey House, or “The Willows” as it’s known by locals, holds New York State Historical Landmark Designation.

Benjamin C. Tousey (1868-1955) built the house from 1914-1915. He was born in Clinton Corners, but reportedly moved to Florida and hit it big in the railway business. With his new wealth, he came back to Dutchess County and began construction on his family home.

While the architect remains unknown, the style of the home is Arts & Crafts. According to architecture.org: “The Arts and Crafts movement originated in England in the mid-19th century as an antidote to the dehumanizing effects of the industrial revolution. It looked back to a time before craftspeople were replaced by machines. Its roots were philosophical rather than architectural and it encompassed many art forms.”

Two features of the home distinct to the Arts and Crafts style are the Porte Cochere (seen above) and the sleeping porches.

A porte cochere is an architectural feature that dates back to French palaces. It’s a covered area designed for offloading horse drawn carriages and later cars. Many early 20th century homes featured them as a sign of luxury.

Sleeping porches are also a hallmark of the Arts and Crafts movement. According to Bob Villa, “The sleeping porches often built into Queen Anne Victorians and Arts & Crafts-style homes provide just the space for all ages to enjoy nature’s version of a cooling system and white noise machine. These rooms were, in effect, screened decks and balconies adjacent to second- or third-story bedrooms, located on a corner to receive breezes from all directions… The house feature was extremely popular at the turn of the 20th century, when health professionals advocated sleeping outdoors as a way to bolster the immune system.”

The sleeping porch at The Willows is now enclosed with plexiglass windows, but one can imagine the appeal way back when.

On the drive home I polled the crowd to ask everyone’s favorite thing from our Clinton Corners vacation.

Amir: Going to Innisfree and sitting in the rock gardens and playing on the fuzzy moss.

Me: The slow pace, the views at sunset, three meals a day together and sleeping in.

As I mentioned we’d entertained the idea of Hawaii or a tropical island, but abandoned it when Delta began to surge and timely passport renewals became impossible. I think it’s good things played out the way they did. There’s something about a family road trip in a car packed to the gills, pillows, stuffies and bags crammed in every possible nook and cranny… it’s not picturesque – but it’s perfectly messy. 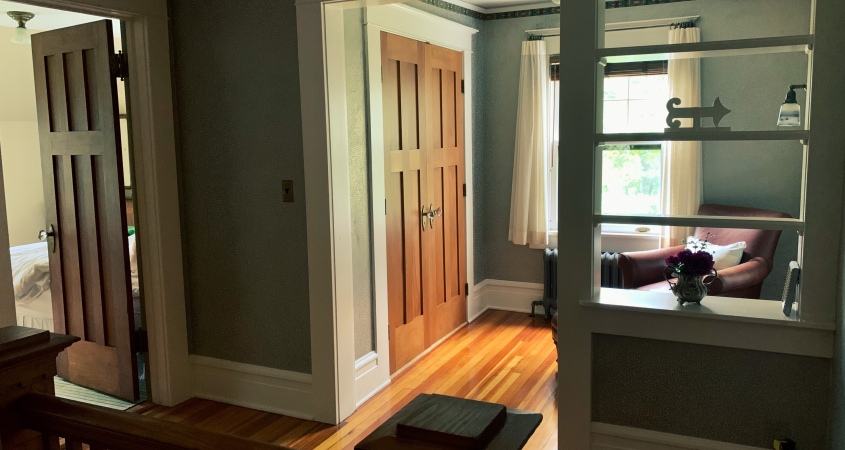 With the reminents of Tropical Storm Ida headed to the northeast, we knew today would be all rain all day. We made plans to eat lunch and explore some shops in Rhinebeck, NY, just a 23 minute drive from Clinton Corners.

Apparently Wednesday in Rhinebeck is the Monday of Richmond in terms of when restaurants take a day off and close. We tried three spots before settling on Village Pizza.

After lunch, we stopped by the Land of Oz Toy Store where everyone, including Mama, picked out one toy. Ollie chose a windmill, Evie a blue race car, Amir a puzzle and me – a greenhouse terrarium kit that I aspire to one day have enough wine and solo time to ever put together.

Back at The Willows after lunch, we found some short-lived quiet time. Amir settled in on the side porch, cracking the windows slightly to hear the rain, and catching up on Reddit. I explored the house, looking both for the book on the history of the house as well as hoping to find some photographic vignettes.

Tomorrow we’re headed to Legoland NY. In summer 2019, we made a pilgrimage to the original Legoland in Denmark while there for Jeff & Najia’s wedding. This Spring, they opened a new park in Goshen, NY, which is new since we’ve last been up this way.

Since no one seemed to want to nap this afternoon, we busted out the new purchases from Land of Oz. The rocket ship puzzle would have been a snap if someone unnamed wasn’t stealing and dropping pieces.

Looks like I’m not getting a nap today. Someone remind me to pack our overnight bags for Legoland hotel tomorrow!