One of the things I’ve most looked forward to since Steph and I toured all over the country interviewing at 20+ residency programs was the prospect of an “elective” month. Almost every program had a month carved out for residents to choose an area of (educational) interest and immerse themselves however they pleased. Finally, after three years of waiting, this year was my chance.

I researched for months and finally settled on traveling to London to work with and learn from the London Ambulance Service, one of the world’s premier prehospital agencies. Combined with the emergency physicians aboard the London Air Ambulance, they are doing some cutting edge stuff – including point of care ultrasound, field thoracotomies, REBOA and true prehospital critical care. Plus I’d have a chance to visit Grandma.

So, needless to say, I was bummed when the opportunity failed to materialize.

But as luck would have it, just a few days later I bumped into Dr. Ornato, the chairman of our department at VCU. I mentioned it to him, and without skipping a beat he asked, “Want to go to Singapore?”

Less than 24 hours later I had an invitation from Singapore General Hospital and the Singapore Civil Defense Force (SCDF), and not long after that I was boarding a flight in Richmond aimed at the opposite side of the world.

Fun Fact #1: Singapore is a tiny island city-state, meaning the entire country is one big city (think Ancient Greece, but Asian). It has been at the center of the global economy for hundreds of years, from a refueling port for the British East India Company to what is now one of the largest shipping ports in the world, with up to 100,000 vessels traversing the Strait of Singapore yearly. 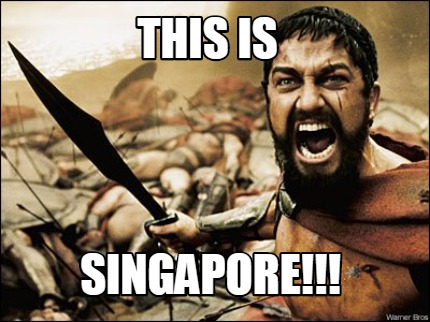 Now when I say Singapore is far away, consider this: the Earth is roughly 24,000 miles around and this was a 12,000 mile flight. If I’d have gone any further I’d have been on my way back home. (And did I mention I was in a middle seat? My knees, back and bladder were not amused. But I digress.) Roughly two days after setting off I landed as far from home as I’d ever been and will likely ever be (until I make it into orbit, that is).

My first impression both in the airport moving through customs and in the taxi on the way to the place where I’d be stay for the next ten days was pleasant surprise at just how clean, efficient and organized the whole place seemed to be. No pushing or even a raised voice, just well designed infrastructure ready to welcome visitors, students, investors and most importantly: me.

I decided to try AirBnb for the first time. I was traveling alone and found it to be much cheaper than hotels, so why not give it a shot. There was of course the possibility of being murdered in a stranger’s home, and every listing looked far too good to be true, but hell what’s life without a little risk of being drugged and dismembered in your sleep every now and then. So I settled on a condo in an upscale residential district which boasted four swimming pools, a hot tub, free wifi, private bedroom and bathroom, plus walking distance to two subway stations, restaurants, shopping, and a few of Singapore’s ubiquitous dining halls (more on that later), all for less than $60/night. See what I mean?! Must be too good to be true.

But it wasn’t! I found the apartment to be exceptionally comfortable and convenient, precisely as advertised. I met my hosts – an American/Chinese Harvard grad and a Moroccan/French banker – who didn’t seem like serial killers at all. Again, pleasantly surprised and more than a little relieved.

I arrived early and had slept for 16 hours all the way across the Pacific, so after getting settled I was ready to explore. I stepped outside to an instant reminder that the country lies just one degree north of the Equator – instant, drenching perspiration. Nevertheless, I spent the first two days exploring the tiny country on foot, sweating profusely.

Singapore is about half the size of London or Los Angeles with a population of just over five million. One of the most striking things about it was the diversity – a nation made up of Chinese, Indian, Malay, European and dozens of other nationalities living in near-complete harmony. That, combined with an effective, non-corrupt government, has attracted tremendous investment, and in just one generation the little city-state has blossomed to become a global center of commerce, ranking 7th in GDP per capita world-wide.

Fun Fact #2: After independence from Britain following WWII, Singapore briefly merged with its big brother to the north, Malaysia. But thanks to racial strife between the Malays and predominantly Chinese Singaporeans, the island was kicked out in 1965. Singapore has gone on to become an economic powerhouse and first world nation while Malaysia currently ranks 79th in GDP. Whoops!

After eating my way around downtown, having coffee with some very pampered cats and strolling around the stunning Gardens by the Bay and exceptionally impressive Art-Science museum it was time to do some actual work. I spent the first two clinical days at Singapore General Hospital, in the emergency department with Dr. Marcus Ong and his staff. Here’s an excerpt from my Facebook travel diary with my first impressions:

“Spent my first day at SGH today. It’s a remarkably similar place, facing many of the same issues we do in the US. Grumpy consultants, slow throughput, ED boarding, and misuse of emergency services. That said, they see almost zero violent trauma, drug seeking is nonexistent, and psychiatric care is managed outside of the ED. Overall, the care is excellent and very up to date, with all the latest technology readily available but used in a more cost effective way.”

I was impressed with the care but noticed it to be somewhat less aggressive than what we do in the US, with invasive procedures done emergently if necessary, but more often left to be sorted out upstairs. While they see very little violent trauma, I was fortunate to see how they managed a motorcycle accident victim – a wealthy British businessman with broken ribs and a collapsed lung. At VCU he would have had a team of 12 providers standing-by on arrival, been stripped of every stitch of clothing and irradiated from head to toe by our CT scanner. At SGH he cracked jokes for an hour while a nervous intern tried his best to place a chest tube.

Like everything else in the country, the healthcare system in Singapore is modern, effective and efficient (ranked most efficient in the world in 2014). Coverage is universal under the principle of no care being completely free which reduces wasteful over usage. Co-payments (typically 3-10% of the cost) and optional supplemental private insurance are paid from a compulsory personal savings account called MediSave. With the 3rd longest life expectancy worldwide Singaporeans spend just 1.6% of GDP on healthcare. For comparison, the US spends over 17% of its wealth on medical services yearly, and its citizens live just slightly shorter lives than the people of the Turks and Caicos islands at number 43 globally.

After my time in the hospital I spent a full day with the staff of the Unit for Prehospital Emergency Care (UPEC) which is led by Dr. Ong. Just a few years ago the government of Singapore sent experts around the world collecting best practices and poured tens of millions of dollars into the project, tasking UPEC with modernizing the EMS system. At the heart of that effort is the SCDF.

The Singapore Civil Defense Force is a quasi-military 4th branch of uniformed national service which includes both the fire department and ambulance service. Unlike the US, the two branches are almost entirely separate, with firefighters generally providing no medical care and responding only to fire incidents. One exception is the new “firebiker” program, with an EMT trained firefighter on a motorcycle able to respond quickly through traffic to cardiac arrest cases. The ambulance service, on the other hand, is well equipped and staffed by paramedics on every ambulance. A unique aspect of both branches is the inclusion of conscripts, young men completing their two years of national service. While most are drafted into the traditional military branches, others fill the ranks of the SCDF.

Fun Fact #3: There are two emergency numbers in Singapore. “9-9-5” is reserved for emergencies, with a government SCDF ambulance responding. “1-7-7-7” is available for non-emergencies, and staffed by unregulated private ambulance companies. Calling 9-9-5 for a non-emergency can result in a hefty fine.

I had a chance to spend time both aboard an SCDF ambulance and in their command center, where over 50 ambulances are dispatched to almost 1000 calls to 9-9-5 daily. Many unique challenges exist, ranging from the use of four primary national languages (English, Tamil, Malay, and Mandarin), to cultural and religious differences, not to mention a complex environment including dense urban centers and the surrounding swamps, jungle and sea. It was there I first heard the term “vertical response time,” the extra minutes which have to be factored in when lugging a stretcher and equipment to the 40th or 60th floor of an apartment or office building. To combat that particular challenge, the government has funded AEDs being placed in the lobby of every other housing complex as well as community hands-only CPR training, all organized by UPEC. The coordination of such an effort is a remarkable achievement. Fun Fact #4: The government LOVES fines. Jaywalking? $20. Smoking in an elevator? Better have $1000 to spare. Even drinking water on the subway or spitting out chewing gum on the street will set you back $500. But most Singaporeans will admit the loss of a few simple freedoms is worth it and has led to a safe and orderly society, with essentially no crime.

As my time was coming to a close I had one last clinical opportunity, the one I was most looking forward to: race medical support for the Singapore Grand Prix. Now I’ve never followed Formula 1 racing, but if I learned one thing from the UCI Road World Championships in Richmond last year it’s that you don’t have to be a superfan to get excited when a big event comes to town. With an all-access pass, a chauffeured golf-cart, the scent of high octane gasoline and that distinct TIE-fighter whine of the engines I was soaking up an intoxicating atmosphere. The medical facilities were impressive, with the SCDF, dozens of volunteers from St. John’s Ambulance and the elite Disaster Assistance Rescue Team (DART) on standby. There were even fire-boats positioned to evacuate patients by sea if necessary, avoiding the inevitable gridlock of a city hosting a world-class event. Like everything else I came across during my time there, every detail was planned out and meticulously accounted for with robotic precision.

After the race, having completed my educational syllabus, I used my last day in the country to be a shameless tourist. The highlight was undoubtedly the stunning botanical gardens, a UNESCO World Heritage site. I spent most of the day strolling through various areas like the Evolution Garden, Healing Garden, Bonsai Garden and of course, the jaw-dropping National Orchid Garden. Next time you find yourself in the area, do yourself a favor and pay it a visit. You won’t be sorry.

Although it may seem I was in a veritable utopia, by the end of my time there I was ready to come home. Not only was I missing my wife, but in a weird way the predictability of the orderliness, combined with the brutal heat became somehow… monotonous. Full of new knowledge and tremendous respect for the work being done to develop Emergency Medicine in Singapore, I caught the last seat on a full flight home after saying goodbye to my new friends at UPEC, SGH and the SCDF. Did I mention Singaporeans love abbreviations?