In the Spring of 1998, I was a 2nd Year at UVA, living in the Tri-Sigma sorority house with lots of great friends.  In the Spring, UVA always gave you the Monday after Easter off, but for my out-of-state friends, a 3 day weekend wasn’t quite long enough to make a trip back home to New England.  As the weather was nice, and Spring just showing itself, my roommates asked if we could go to Virginia Beach for the weekend to celebrate the great weather.  I warned them it wouldn’t be swimming weather, but that we could certainly partake in some very VB things like eating crabs and drinking Corona’s on a patio on a nice day.  They wanted in, and thus, the Krebs Crab Bake was born.

Since that first bake, things have changed tremendously, but some things have stayed the same.  The zen of the party has always been to show up, enjoy the weather, welcome in Spring with some great seafood, ice cold bottled beer, and spend time with friends.  Over the years, I’ve been through 3 jobs, 4 boyfriends and now 1 husband, medical school, and a move to Richmond.  Yet, the Crab Bake remains the one day of the year when all those random people from my life who are strangers to each other, come together and make new friends.  And there’s my mom, the anchor of it all.  In honor of the upcoming 18th Annual Krebs Crab Bake coming up on May 9, I decided to recap the little known history of this event.  I hope you will submit some of your favorite memories and milestones for me to add to this list.

Kaye bought all us girls Easter Baskets and hid them around the house for us to find.  Yes, we were 19, but it was awesome.  At the first Bake we did have blue crabs, but we hadn’t yet discovered the wonders of Frogmore Stew. 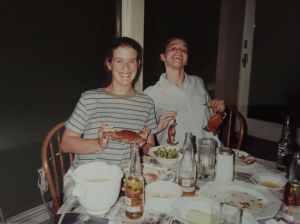 The Crab Bake by tradition had always been on the Saturday before Easter, because that was the UVA 3-day weekend.  So, for Year 5, in keeping with tradition, we held the Bake on March 30 as Easter was early that season, but the next day.  Little did we know, but it’s illegal to fish for blue crab in VA prior to April 1 each year, so there were no blue crabs available ANYWHERE.  Our solution (and not a cheap one), Alaskan King Crab Legs!  Memorable, but not financially sustainable.  From this point forward, the Crab Bake would always be after April 1, even if Easter fell in March.

I had just started working at Trader Publishing Company in February 2003.  Little did I know, that would be a huge turning point in my life.  A career I didn’t even know I would love would blossom, and I made some of the best friends of my life.  Crab Bake regulars made their mark, and cemented their lifetime invites.

This was the one and only year we tried to have the bake without Kaye.  She was off in Gatlinburg, TN at the ACBL Regional Bridge Tournament.  Cara Reske, Steph (Krup) Repole & Dave Lowery and I thought, “how hard can this be?” and decided to have the Bake without Kaye.  Let’s just say there’s a reason we’ve never had one since where Kaye wasn’t there.

I sent Steph and Cara out to Bubba’s to pick up the fresh crabs.  I guess I wasn’t explicit enough in my instructions, because when they got back to the house, I reached into the bag and almost lost a finger.  I had failed to mentioned they should ask for the crabs to be cooked there with Old Bay.  They brought home 4 dozen live crabs that I didn’t have the heart to kill myself.  They hopped back in my VW Cabrio, went back to Bubbas, had the crabs cooked, and then returned to Thoroughgood.  Ooops.

By 2006, I had made A LOT of new friends at Trader, and the Crab Bake attendance had expanded accordingly.  In her wisdom, my mom went searching for a better way to feed 40+ people crabs at roughly the same time.  Behold:  Frogmore Stew.  A new tradition was born.

To celebrate a decade of Crab Bakes, Allen & Suzanna McGrath gave my mom a commemorative rock with an inscription honoring 10 long years of good food, cold beer and friends.  Unfortunately, the weather was 38 degrees, but we didn’t let that stop us.  We broke out the fire pits to keep warm, and created another memorable event.  I think there may have even been snowflakes.  Year 10 was also the 1st year for Cornhole Boards. 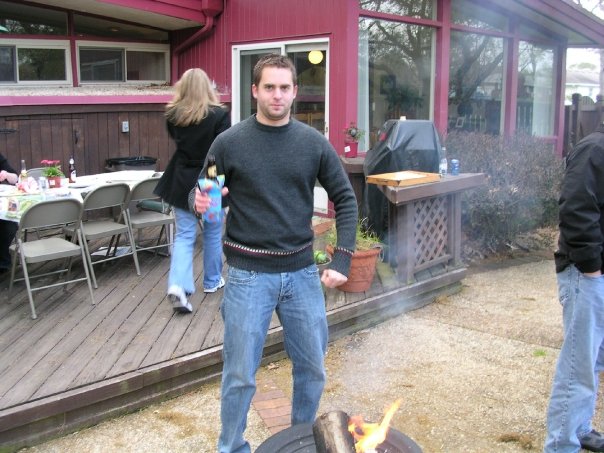 For Lucky #13, Bartender Steve from Tautog’s and his lovely girlfriend Vanessa joined the crowd.  Steve tried to rival Kevin Freet for best bloody mary.  The Trader crew remained loyal attendees, even though I had stopped working there back in 2007. 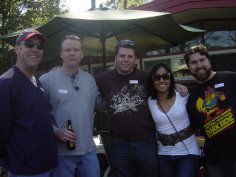 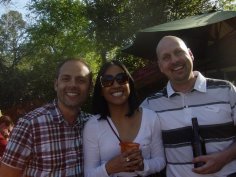 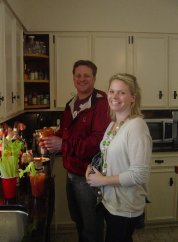 In the Fall of 2010, I started medical school at EVMS, and with that came a whole new crop of friends.  14 was also the first year with it’s own logo designed by Nick Valese.  We had about 60 koozies made, which were a huge hit!

Year 15 was the year Jackie started bringing her delicious and adorable cookies for all to enjoy!  Back by popular demand, we ordered koozies again. 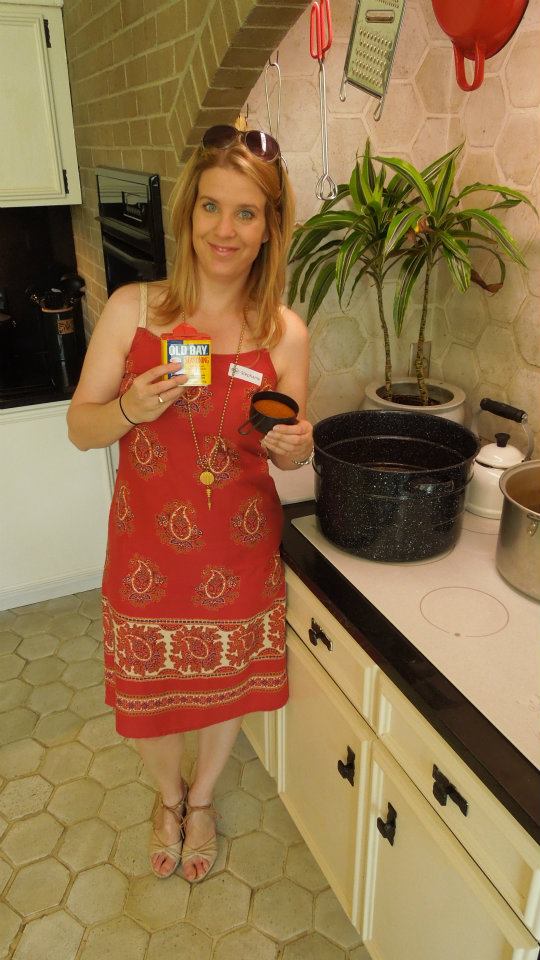 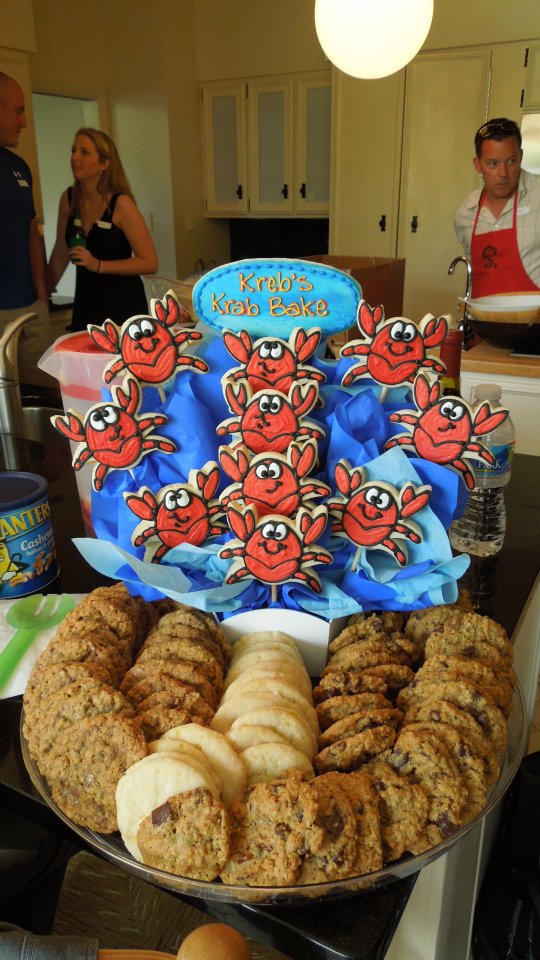 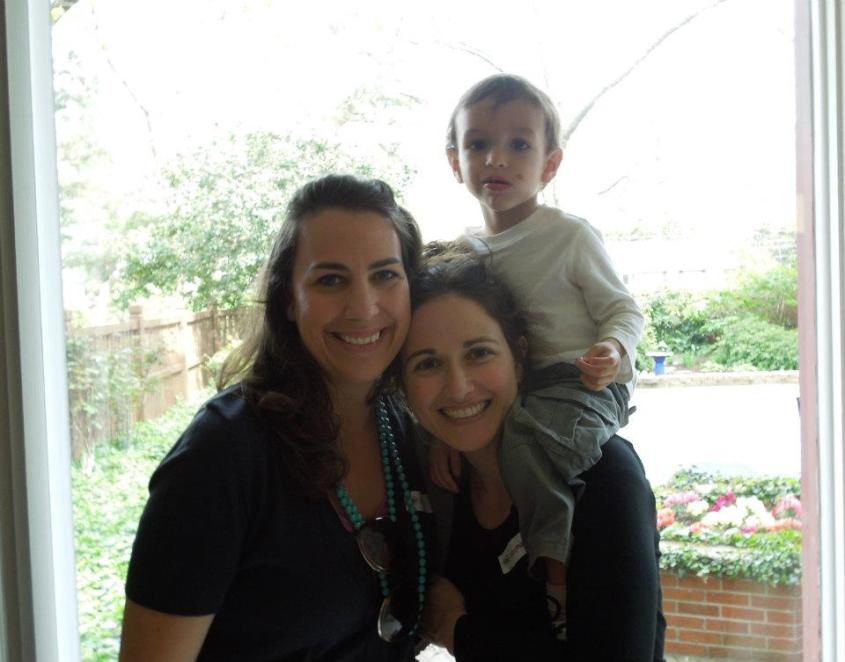 Year 16 we had a lot more EMS people in attendance.  Jackie was VERY pregnant with Ethan and Jacob.  It was also the first year Amir and I were officially together.  The financial strain of Medical School was catching up, so we opted to forego koozies this year. 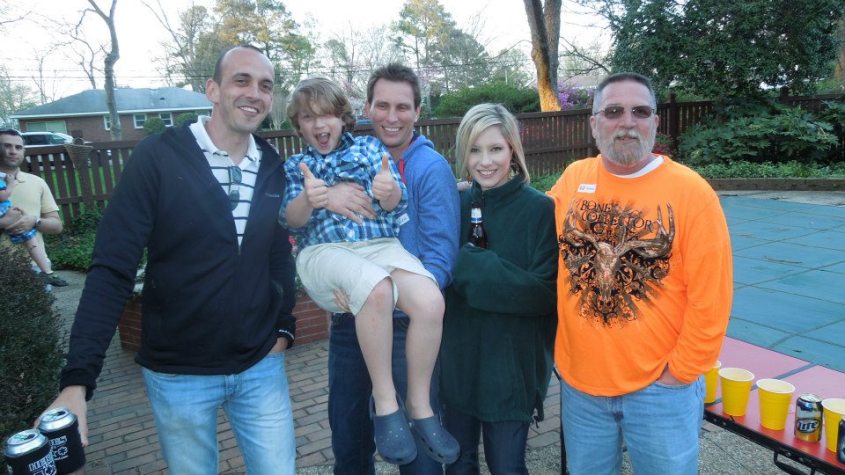 The year of Giant Jenga and snow crab legs – AGAIN!  Apparently all the cold weather and storms stirred up the bottom of the Chesapeake Bay, creating an uninhabitable environment for the crabs to breed for the season.  We called around to 12 different crab distributors with no luck.  There were no blue crabs to be had across the East Coast from MD to NC. 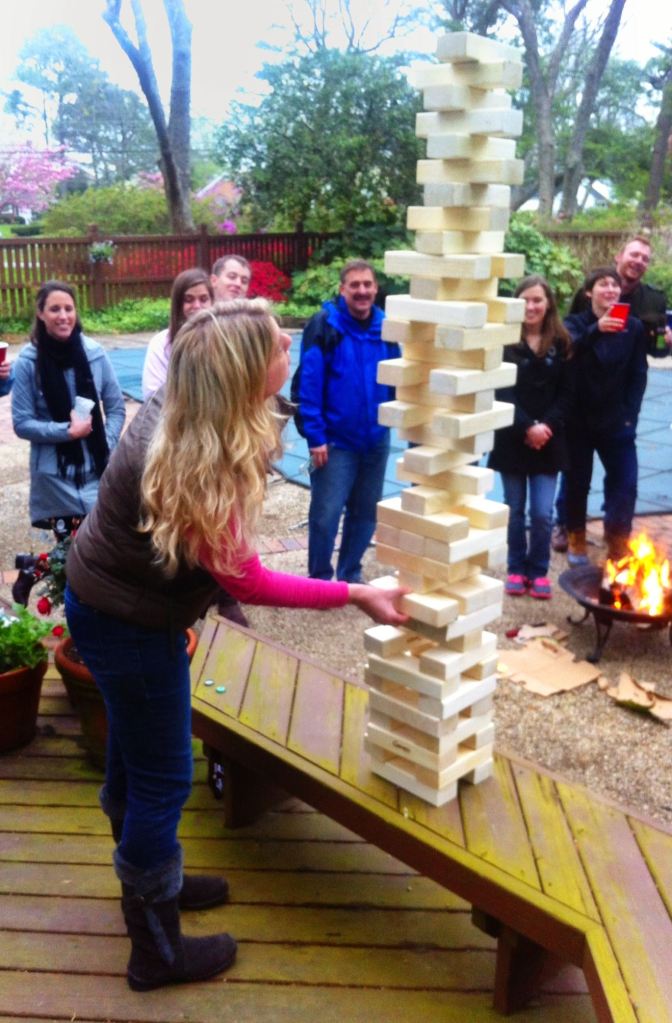 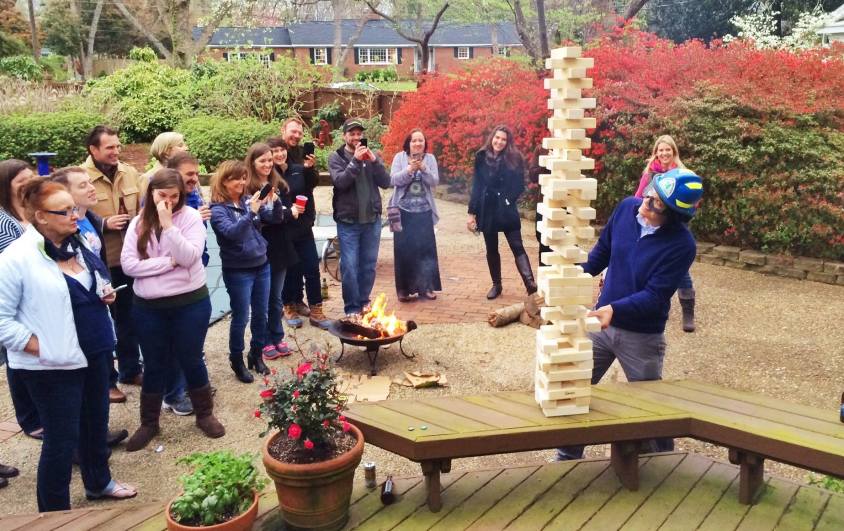 This year’s crab bake was complicated by the sale of the Thoroughgood house.  Fortunately, the timing allowed for the party to take place as planned on May 7.  For a while, everything was up in the air, but with a new house purchased and the Thoroughgood House sold in only 3 days, the 19th is on!